Healing In His Name 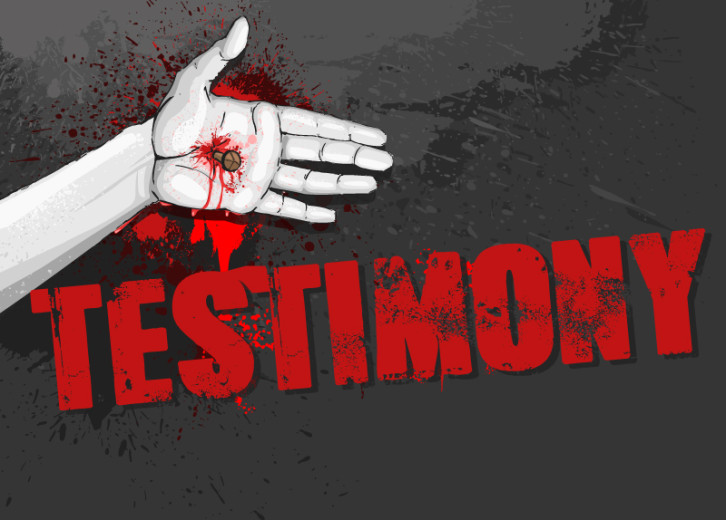 Sometimes bondage is due to personal sin or our response to the sin of others. Sometimes it seems to come from the outside through no fault of our own, like physical or emotional afflictions. All of it, however, is perpetuated by belief in a lie. We remain in bondage by fixating on what got us there, rather than on the One who sets us free. This is the testimony of a dear friend of mine who experienced freedom and healing by shifting her focus onto the Truth despite her circumstances.

On February 15th, 2013, I began a journey that would forever change my life. As most of you know, I became very sick with a series of consecutive illnesses, including bronchitis, strider, and asthma-like breathing issues. These illnesses seemed to continue on for months coupled with numerous doctor and emergency room visits. As time progressed, my symptoms worsened. I developed swallowing problems, choking episodes, and even more severe breathing issues. Eventually I required constant supervision, which led us to fly to WA for 5 months so that family members could care for me 24/7. My condition continued to worsen until finally, after about 9 doctors, I was diagnosed with Laryngopharyngeal Reflux (LPR).

In a nutshell, LPR is a disease that affects the tissues of the esophagus, sinuses, larynx, pharynx, and lungs. It is usually brought on by a dysfunctional lower esophageal sphincter (LES) located between the esophagus and the stomach. If the LES is not functioning properly, it allows acid to back up into the esophagus and surrounding diseased tissues and cause swelling, lesions, and blistering. This then leads to swallowing and choking issues and of course when acid hits the lungs, breathing is inhibited. There is no cure for LPR. It can only be managed with drugs, diet, and potentially life-threatening surgeries. Some cases of LPR are relatively easy to manage. However, my case was severe. Consequently, after gaining some sense of stability in WA for 5 months, I unfortunately found myself in the middle of a relapse upon returning to TX. It had gotten so bad that I could not even travel more than 20 minutes from my home because the vibrations of the car would cause the LES to spasm and set off a severe breathing reaction.

As you can imagine, depression began to set in. My whole life had changed on a dime as had the lives of my husband and son. No longer could we do the things we used to do. I could only eat a handful of foods at certain times in certain amounts. Travel was touch and go. Even talking, laughing, crying, and singing were severely limited. Everything had changed.

I had very little hope left and I had resolved to accept my new way of life indefinitely.

Then one day, I went to church and in the course of one afternoon, I met three women who learned about my condition. With undeniable conviction, they began to encourage me about healing. The first woman prophesied that God was going to heal me. The second woman encouraged me not to simply accept my illness, but rather to contend for my healing in prayer. The third woman reminded me of the importance of persistent child-like faith. Needless to say, I returned home that day with a little more hope.

Eventually, I returned to church to attend a church service where the pastors pray for sick people. As a small group of people gathered around me to pray, I felt the peace of the Holy Spirit overwhelm me. It felt like a tangible warm Presence flushed over my whole body. Again, I returned home encouraged.

In the days following, I found myself praying differently. Instead of crying out to God with desperate pleas to heal me like a distant stranger or a beggar in the street, I began to respond to Him as a child does to a loving Father.
I began to thank God for all that Jesus had already done for me by dying on the cross and that “by His stripes we are healed.” I started to pray with the authority that Jesus gave to those who call upon the name of Jesus, and in Jesus’ name I rebuked the illness within me.

Within a few days, I found my faith was significantly strengthened. The depression had lifted. Though I was still experiencing physical symptoms of LPR on a daily basis, I was definitely encouraged. Then, the impossible happened…..

One night while John, Josiah, and I were lounging around spending time together, Josiah suddenly stopped talking and looked upward. I asked him what was wrong and he told me to be still and wait for a moment because God was speaking to him. I waited. Then my 9 year old son turned to me and said, “Mom, I believe I have a Word for you from God.” He put his hands on my head and with absolute conviction he looked me straight in the eyes and said, “Devil, get out!”
In that instant I felt a tangible physical manifestation of tingling all over my body as my son prayed for me under the power of the Holy Spirit. I can not describe it in any other way. It shook me to the core.

When Josiah was finished praying, I knew beyond a shadow of a doubt something had happened. I had been healed! I ran downstairs and prepared myself some salsa. NOTE: Please understand, that something as acidic as salsa could have potentially sent me to the emergency room again gasping for air. However, that’s not what happened. I didn’t have a reaction!! I proceeded to eat every acidic thing I could get my hands on. No reaction. I jumped up and down. I danced. I sang, and I sang, and I sang. No reaction.

Over the next few weeks I continued to test my limitations and I drove out several hours and back. No reaction. To this day……no reaction. I have been healed! God has healed me!
As for Josiah, I asked him why he did what he did and he said, “First, I did it because God told me to. Secondly, I did it because the Bible says the apostles did it in Jesus’ name, so why can’t I?!” Lord, help us all to have such child-like faith!

To you my family and friends……I thank you for your faithful prayers and your unending support throughout this very difficult time. You are a treasure to us. I pray you have been blessed by this testimony. I leave you with this…..

No man-made religion, no well-crafted life philosophy, no worldly wisdom can EVER compare to the POWER of the Living God!

No other Name on heaven or earth can heal the sick, give sight to the blind, or set the captives free!

There has never been, nor will there ever be anyone like my Jesus and for that……I am eternally grateful.

With All My Love,

You Just Lost The Game
The Truth Will Set You Free